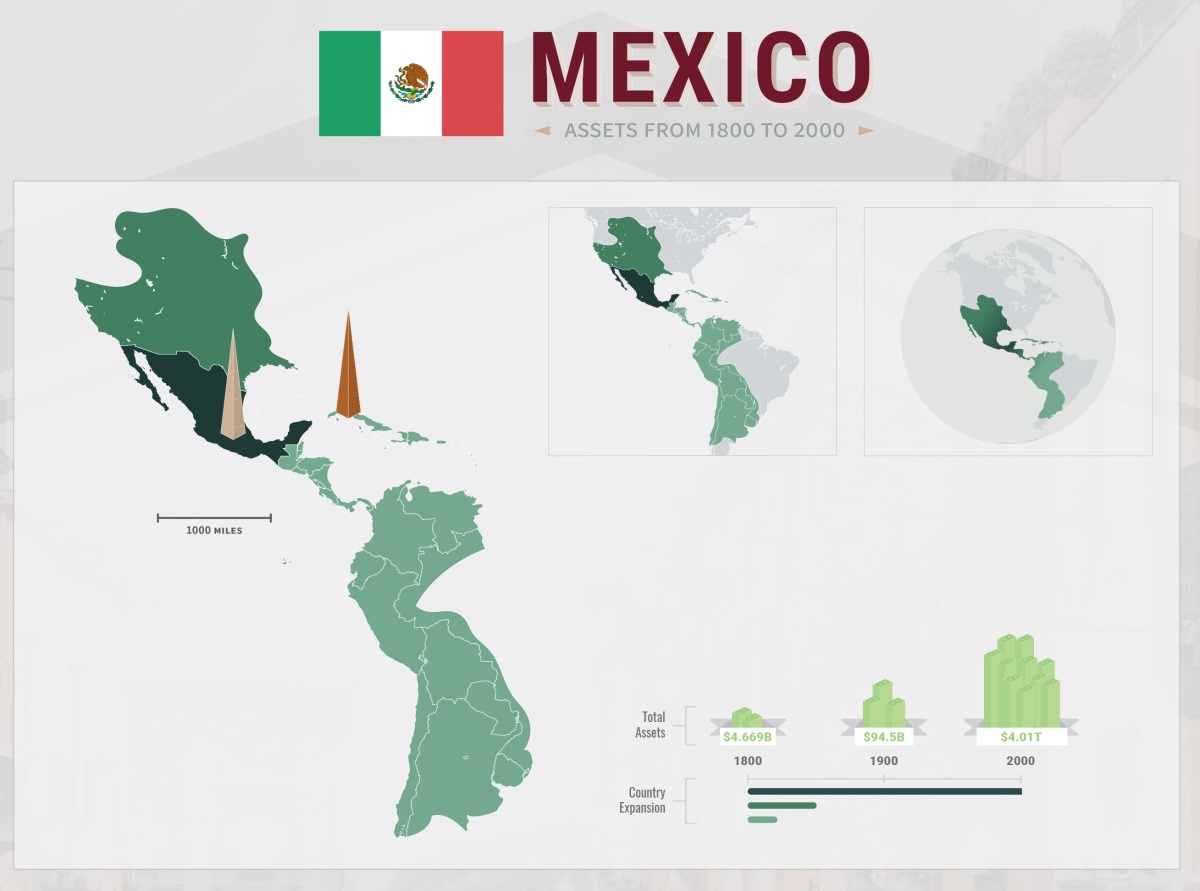 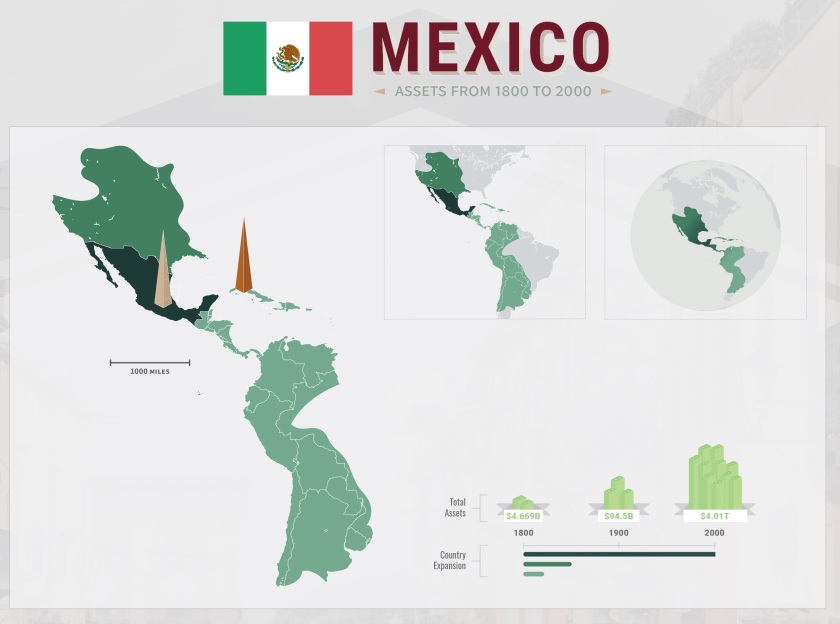 Unlike both the United States and Canada, Mexico (New Spain) represents the negative impacts of economic development over the last two centuries. While the macroeconomic patterns of absolute wealth growth are apparent, the concentration of this wealth in a single location (Mexico City) as well as the massive loss of natural resource capital (starting with the Baja peninsula and extending east and north, in addition to losses across central America, South America, and the Caribbean) reveals the extraordinarily deep problems with gross domestic product as a measure of economic development. In contrast, asset value analysis reveals the contradictions of capital accumulation clearly in the uneven processes of Mexican national industrialization. 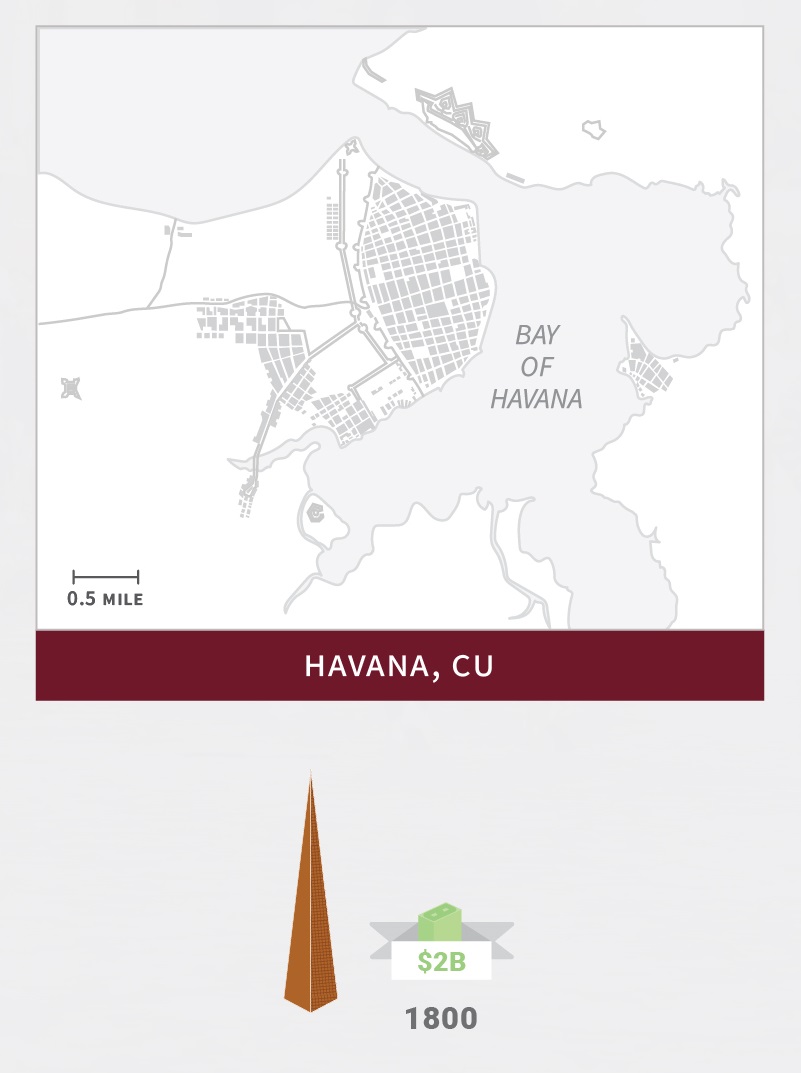 In 1800, New Spain was part of the declining Spanish empire which had consolidated in the late sixteenth century. Given the specific political context of the emergence of professional economics as part of the patterns of late nineteenth century European imperialism and American global industrial ambition, nearly all Anglophone scholars have lost sight of the dominance of the Spanish (and Portuguese) imperial systems in the western hemisphere prior to 1750. At the heart of the Spanish New World was the plantation colony in Havana, Cuba. Worth nearly $2 billion (inflation-adjusted) in 1800, it was the dominant agricultural market, rivaled only by San Domingue prior to the Haitian Revolution. The century of strife and economic collapse that defined Mexico, Central America, and South America after 1820 is often misunderstood as a series of struggles for democratic independence. Asset value analysis helps to foster an understanding about the conflict of imperial systems across these geographies where conservative investors often retreated from the forces of industrialization in the nascent United States, especially after 1865. Mexico and the former provinces of the Lusophone New World provide a limitless terrain to better understand the limitations of free market ideologies. It is precisely their histories as local fiefdoms that preserved arbitrary governmental authorities through a mask of religious justification that shows the horrors of Thomas Jefferson’s (and Andrew Jackson’s and Abraham Lincoln’s) hagiographies of agrarian democratic republics. 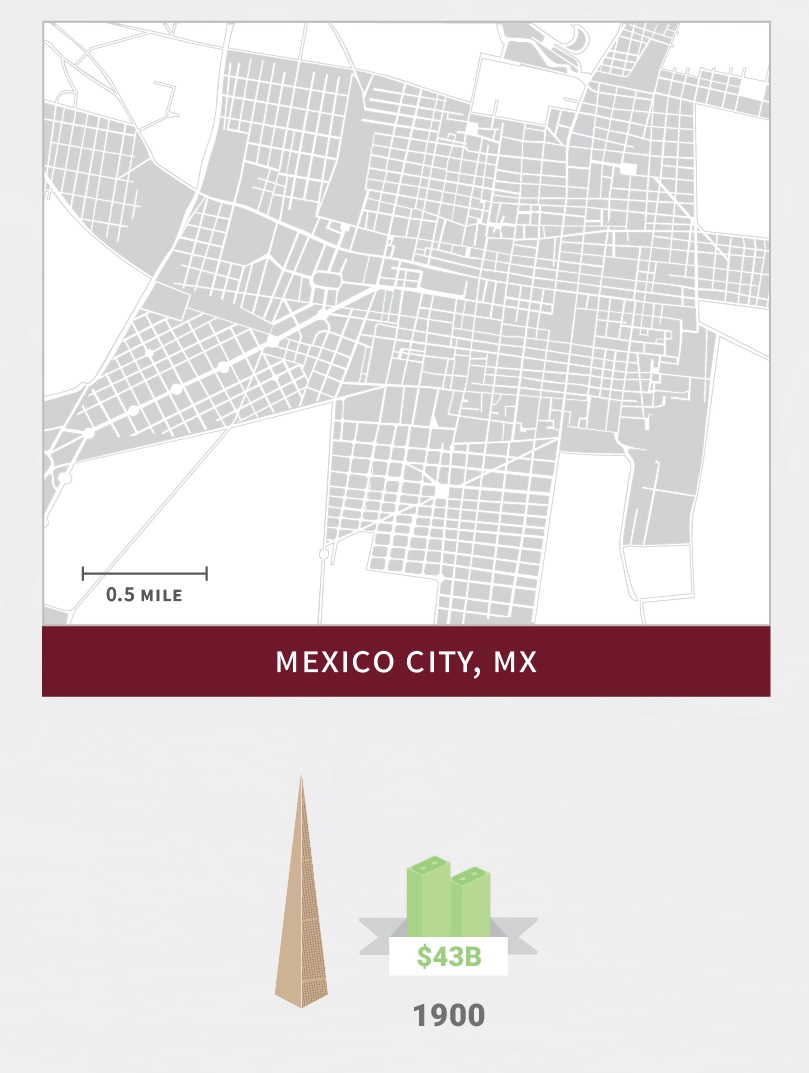 At the start of the twentieth century, the success of American foreign investment in Mexico shows the capacity of capital to create a massive urban infrastructure in Mexico City. Unlike Havana, American investment in physical infrastructure was not constrained by the immediate presence of the Caribbean sea and surrounding hills. Mexico City was a late nineteenth century vision of industrial sprawl. The downtown hosted numerous banks and natural resource extraction films, especially in coal and oil. Notably, the emergence of public utilities (centralized fresh water, waste water, subways, and electricity) did not occur. This fact limited the market growth in central Mexico and reinforced the local political fragmentation that defined the entire region. The asset growth to $43 billion was significant for the immediate area, but lagged significantly behind both New York and, the more comparable example, Toronto. Mexico remained a state more committed to its agricultural roots with only small flashes of disorganized industrial investment in 1900. The weakness of this political economic structure led to massive financial collapse after 1920 and no signs of real recovery for five decades. 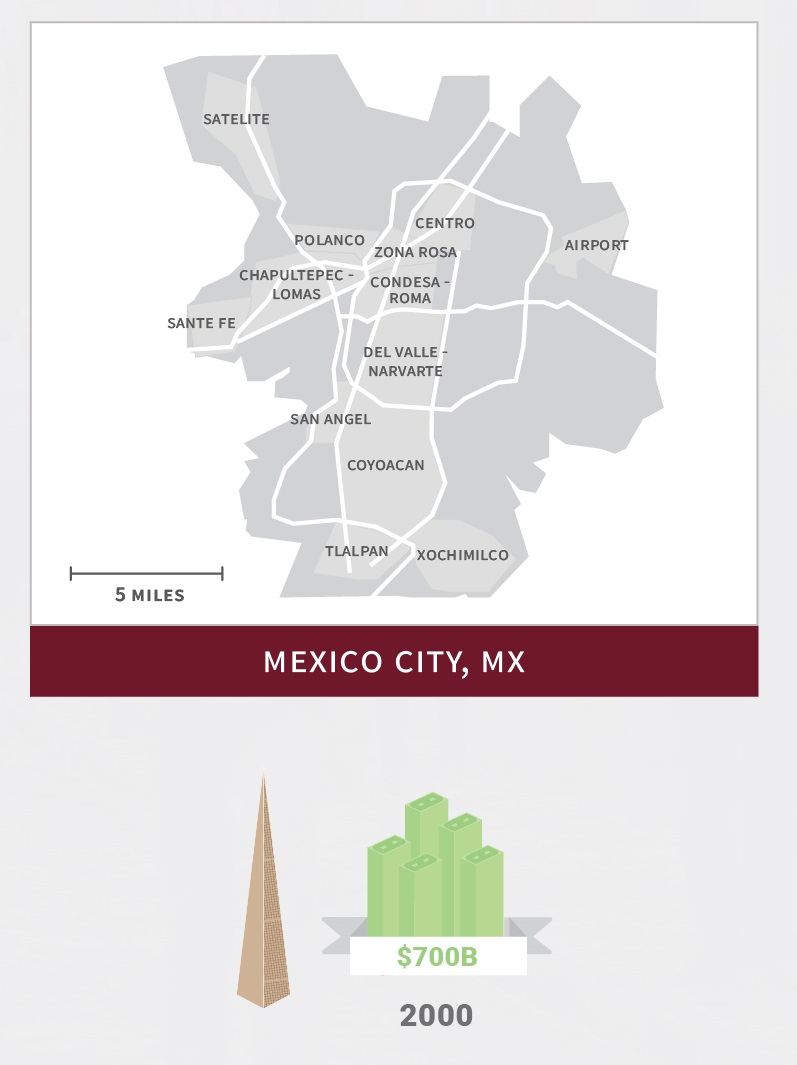 Mexico in the late twentieth century became an outlet for continental economic consolidation. Where Canada became an extension of the New York, Philadelphia, and Boston macroeconomic system, Mexico became a source of labor for the Sunbelt post-industrial systems represented by Los Angeles, Phoenix, Houston, Miami, and Atlanta. Worth approximately $700 billion in asset value over the last twenty years, very little metropolitan development expanded in Mexico beyond its capital city. Even the array of smaller, resort towns remained peripheral and dependent on foreign investment and tourism. Yet, very few of the displaced working families from Canada and the United States took advantage of the potential opportunities of migration to Mexico in response to globalization. As a result, despite significant economic growth, Mexico remained the smallest of the North American economies. If working families, labor unions, and small businesses better understood asset value, Mexico could experience similar economic expansions that defined the industrial Midwest and the financial revolutions in both eastern Canada and the American sunbelt. 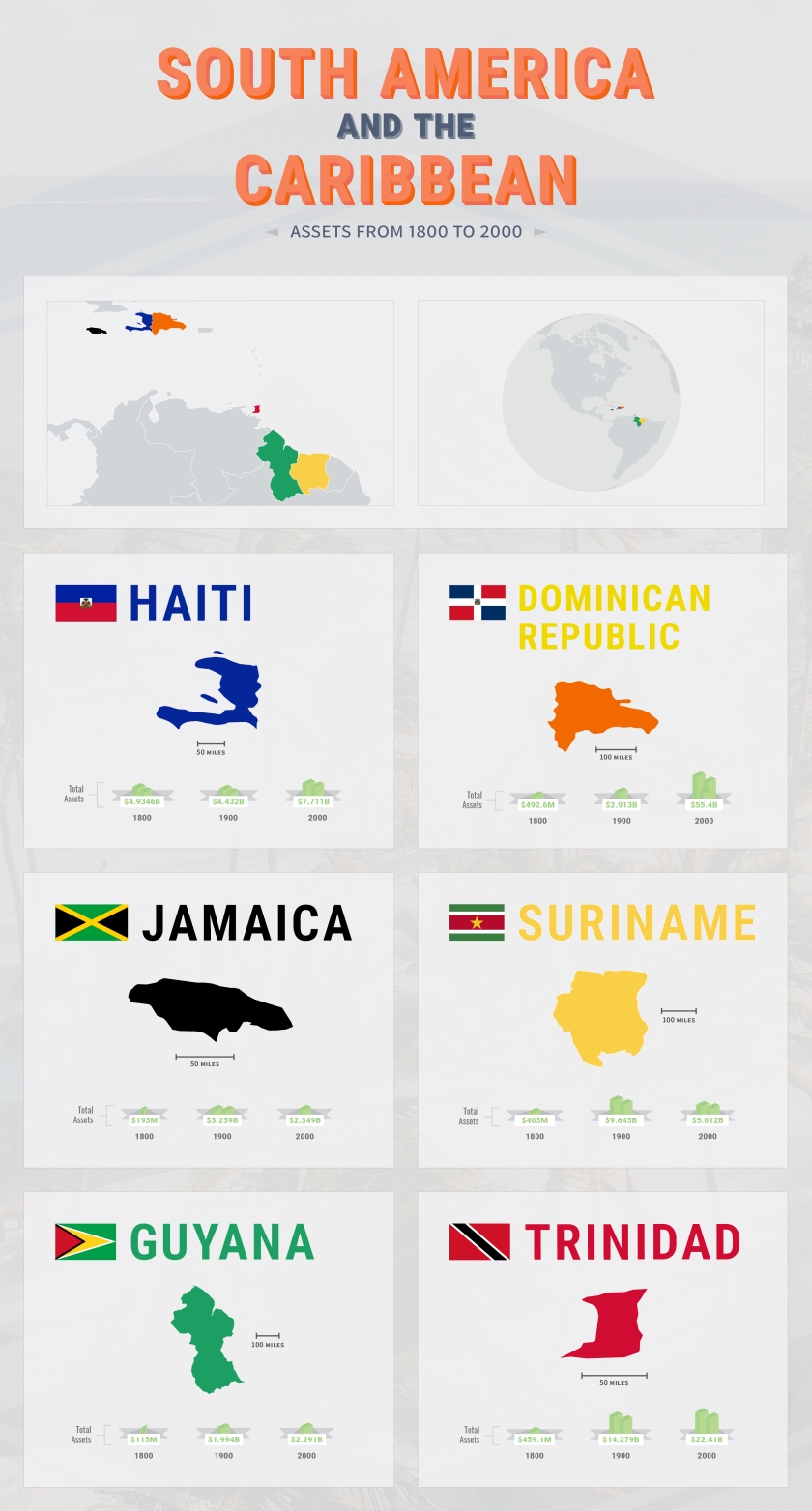 One final note. The Caribbean economies (and smaller related nations in South America) present very interesting opportunities, especially in the context of climate change. More attention to these nations and their economies would open doors for economic autonomy for working families throughout North America.